A collaboration between NCAER and the Univeristy of Maryland, the Indian Human Development Survey (IHDS) was designed to complement existing Indian surveys by bringing together a wide range of indicators in a single survey. Unlike single-topic surveys, the IHDS collects data on different dimensions of human development like education, caste, gender relations and infrastructure. This breadth permits analyses of associations across a range of social and economic conditions. For example, studying indicators for children (e.g., learning, immunizations) requires joint consideration of the roles of poverty, family structure, gender relations, community context, and the availability of facilities.

The first round (IHDS-1) of the survey was completed in 2004-5 covering 41,554 urban and rural households in all states and union territories of India (except Andaman/Nicobar and Lakshadweep). The data are publicly available through ICPSR and are currently being used by about 7,000 users worldwide. During 2011-12, the second round (IHDS-II) re-interviewed the same households, creating one of the largest panel surveys in the world and providing a direct measure of India’s economic progress over seven years. The NCAER is currently collating the data from IHDS-II and the data are expected to be made public in early-2015.

It has long been known that Indian women’s labour force participation rates have a U-shaped relationship with their education, rather than a more conventional positive linear relationship. The low rates of employment for moderately educated women are usually explained either as a result of the cultural stigma of women’s employment in a patriarchal society or because of the lack of demand from white-collar and light manufacturing jobs for women with middle levels of education. Using especially well-suited data from two waves of the India Human Development Survey, the authors test these explanations by examining the education–employment relationship in districts with low cultural stigma (low observance of purdah) and high proportions of (salaried) employment considered “suitable” for women. The paper finds little support for either the cultural or structural explanations: the education–employment relationship remains U-shaped in districts with low stigma or with more “suitable” salaried employment. Instead, the authors suggest that a better explanation lies in the high levels of gender segregation where most white-collar jobs are reserved for men. They simulate what the education–employment relationship would look like if these white-collar occupations were female dominated as they are in most places in the world and find a more conventional linear relationship. 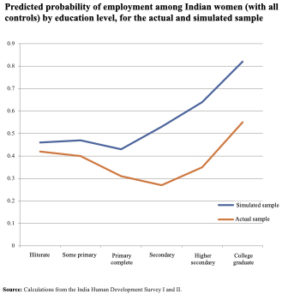 Esha Chatterjee is an Assistant Professor in the Department of Humanities and Social Sciences at the Indian Institute of Technology Kanpur. She received her PhD in Sociology from the University of Maryland, College Park, in 2020. Her primary research interests are in the fields of demography and gender, work and family. Her past and ongoing projects examine the relationship between women’s employment and education; fertility intentions, behaviour and maternal health, the unmet need for contraception, and internal migration in the Indian context. Her work has been published in peer-reviewed journals such as Journal of Ethnic and Migration Studies, Population Studies, PLOS ONE and Demographic Research. Her paper, “Indian paradox: Rising education, declining women’s employment” has been awarded the Editor’s choice award by Demographic Research, and has been featured in several prominent publications in India like The Hindu, ThePrint, and Livemint.

Reeve Vanneman is a sociologist at the University of Maryland whose research focuses on changing gender inequalities in the United States and India. With Sonal Desai and colleagues in Delhi at the National Council of Applied Economic Research (NCAER), he has helped field two waves of the India Human Development Survey (IHDS). With Dave Cotter and Joan Hermsen, he has investigated why the US gender revolution of the 1970s and 1980s stalled in the 1990s. His recent work with Joanna Motro has investigated whether changing cultural themes about working mothers may have contributed to this stalled gender revolution.

Revisiting the relationship between farm mechanization and labour requirement in India

By Pallavi Rajkhowa and Zaneta Kubik

In many developing and emerging economies, better employment opportunities in the non-farm sector have increased rural wages due to labour shortages during the peak agricultural season. Increasing wages often cause a substitution of labour for mechanical power, but extensive use of labour-saving technologies may cause labour displacement and have serious equity concerns. Using the nationally representative India Human Development Survey (IHDS), this paper analyses the relationship between different types of farm machines and labour requirements in India. The results suggest that a unit increase in the level of farm mechanization increases the demand for hired labour by 12 per cent. Moreover, the authors find that the level of farm mechanization has a positive effect on women’s participation in farm work, while it decreases the probability of children participating in agriculture-related work. Disaggregated analysis based on types of farm machinery suggests that water-lifting equipment, draft power, and tractors increase the probability of male household members working on their farms, while all types of farm machines, except tractors, have a positive effect on female farm labour participation. The authors also find that the effect of farm mechanization on the demand for hired labour decreases as the size of the farm increases. 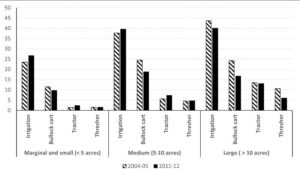 Pallavi Rajkhowa is pursuing her PhD in Agriculture Economics from Center for Development Research (ZEF), University of Bonn, Germany. Prior to joining ZEF, Pallavi has worked at the Indian Council for Research on International Economic Relations (ICRIER), International Food Policy Research Institute (IFPRI), and Confederation of Indian Industry (CII) on various agriculture and food policy-related issues, as well as macro-economic analysis. Her current work seeks to understand the impact of digital technologies on development outcomes in India, particularly in the areas of agriculture, agricultural markets, and the rural non-farm sector.

Zaneta Kubik is a senior researcher at the Center for Development Research (ZEF), University of Bonn, Germany. She is a development economist with a background in economics and political science. She holds a PhD in Economics from the University of Paris 1 Panthéon Sorbonne in France. In her research, she focuses on labour markets, migration, and poverty analysis, in particular in the context of Sub-Saharan Africa and South Asia. She is also a lecturer in the Economics Department at the University of Bonn where she teaches development economics.